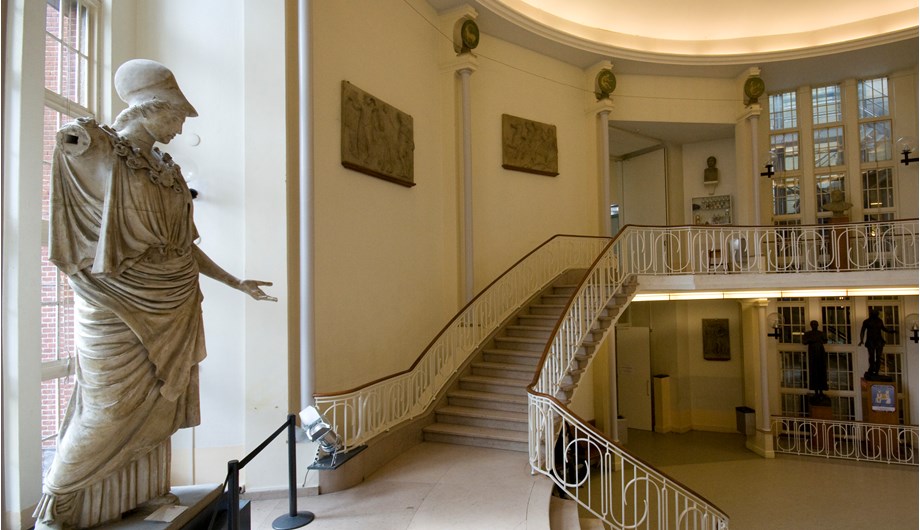 In 2016 I approached Markus Berges of the fantastic German band ERDMÖBEL with a request: Would he like to write a lyric for me that is some sort of on INSTRUCTION?
This all had to do with the fact the David Kweksilber, Rodrigo Faina and I had concocted the plan to fill a concert for the David Kweksilber Big Band with only ‘Instructions’. Both, Rodrigo and I, had already been inspired in the past by texts of Julio Cortázar to write music. It led me to write ‘Instructions On How To Kill Ants In Rome’, for example.
Now everyhting should be bigger, bolder and maybe also a bit more contemporary, in the sense that we could ask a LIVING writer/poet to contribute to the program.
Well, to cut a long story short: Markus agreed and wrote a beatiful text, called ‘Rasenmäher‘ (lawnmower), that I used as a starting point for a piece.
But not only was Markus’ lyric a welcome addition to the DKBB concert’s repertoire, it also inspired Erdmöbel to write and play and arrange and release an album of their own called ‘Hinweise zum Gebrauch’, INSTRUCTION MANUAL.
This only goes to show that inspiration at the best of times works as a spark that ignites lots of different flames. 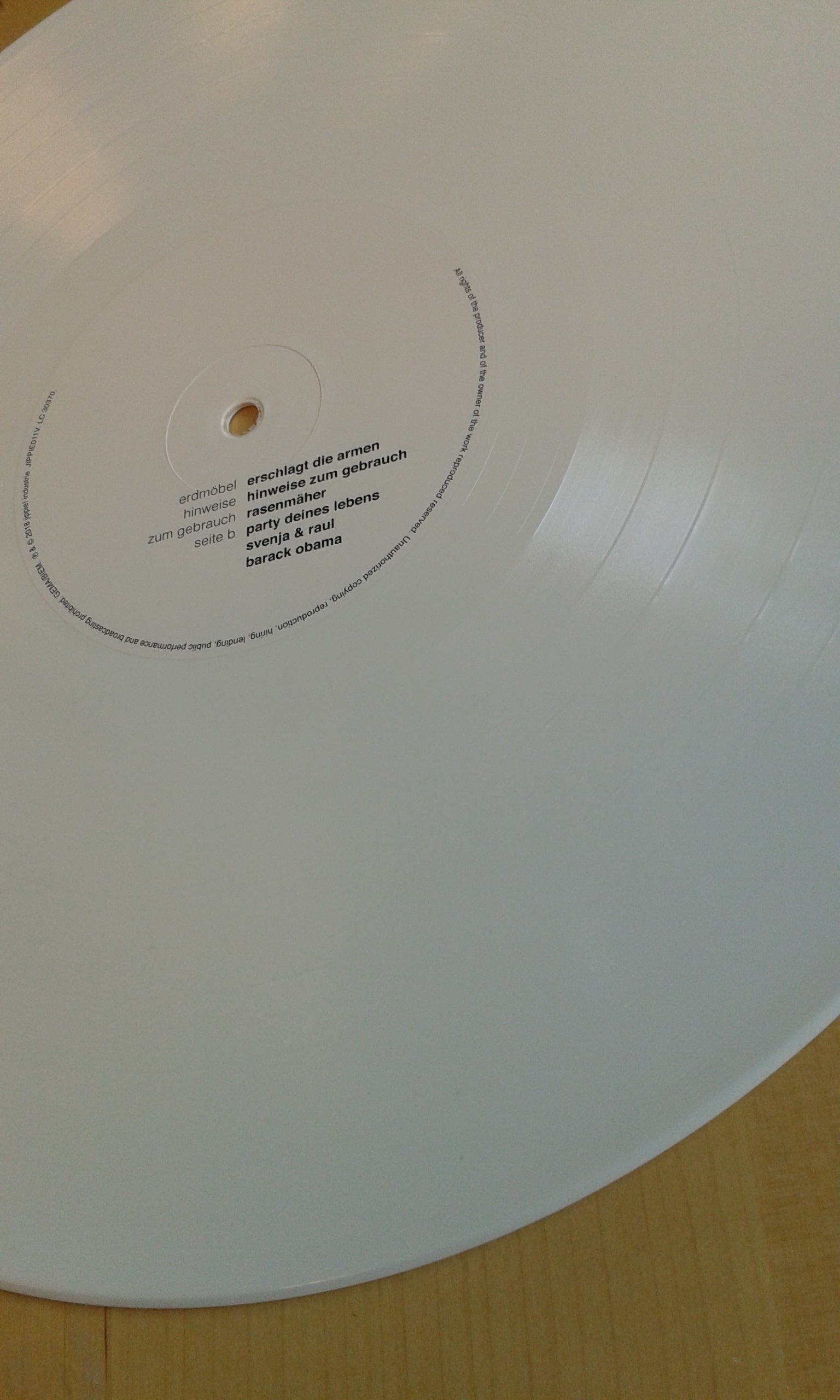 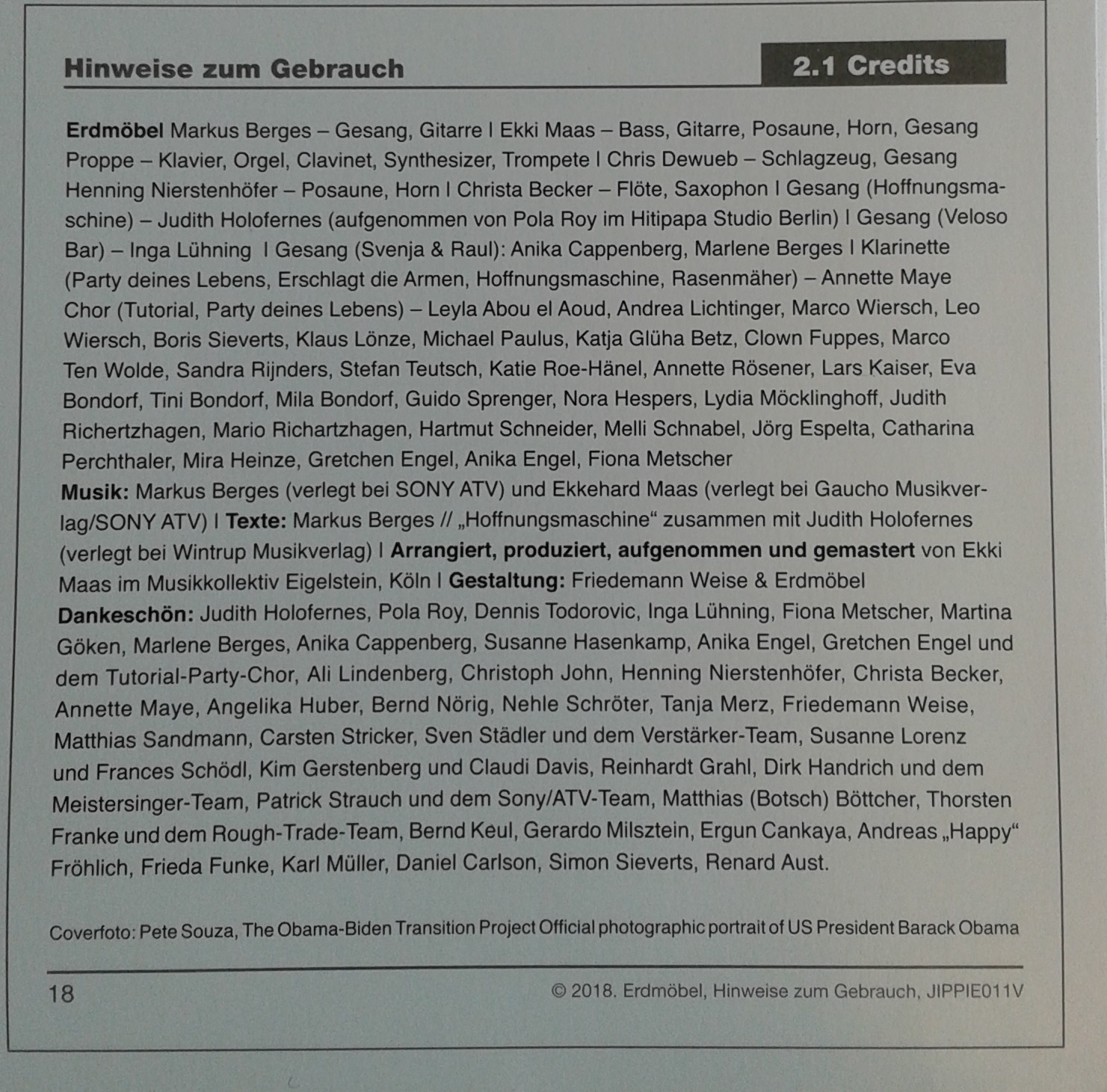 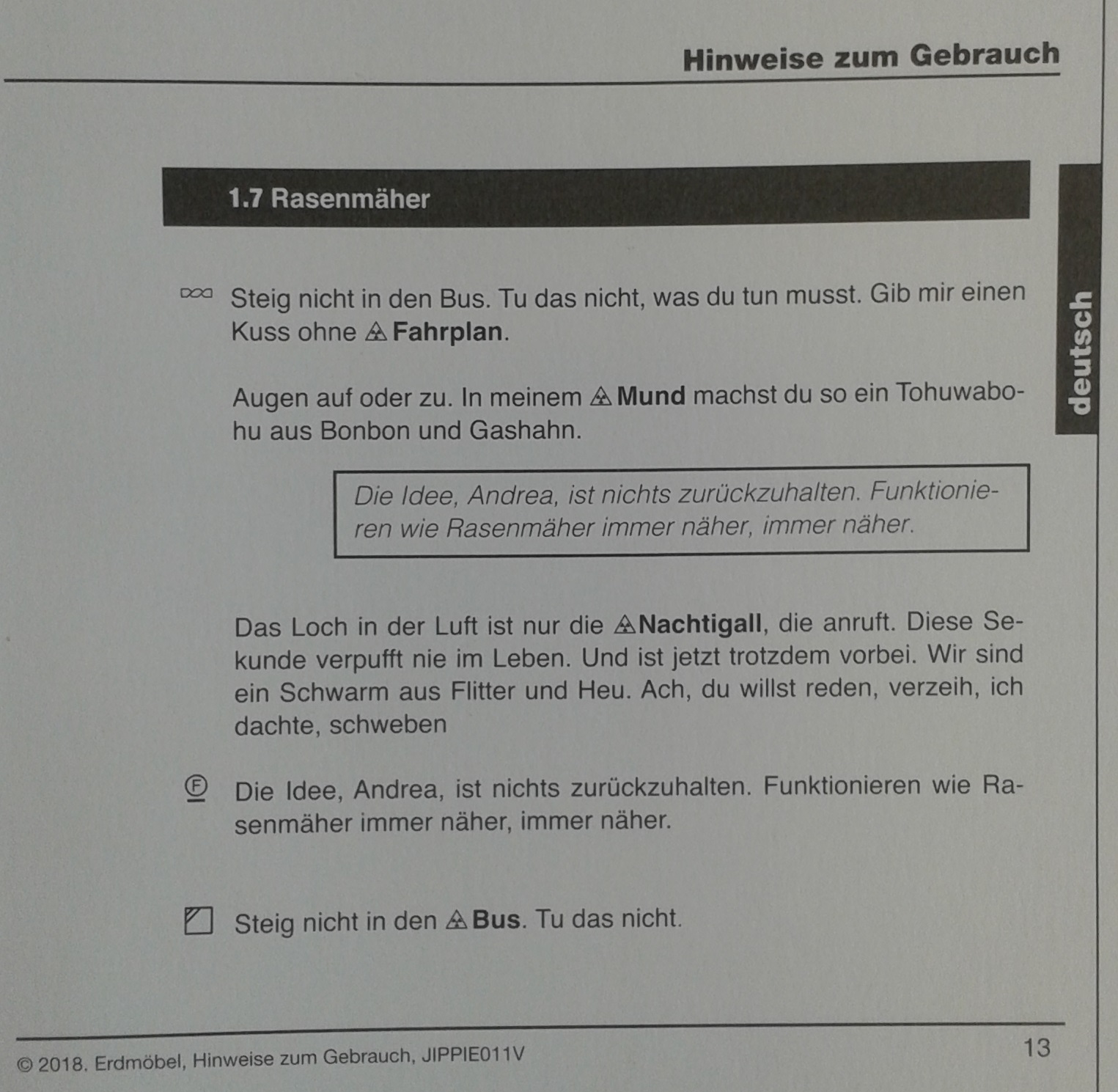 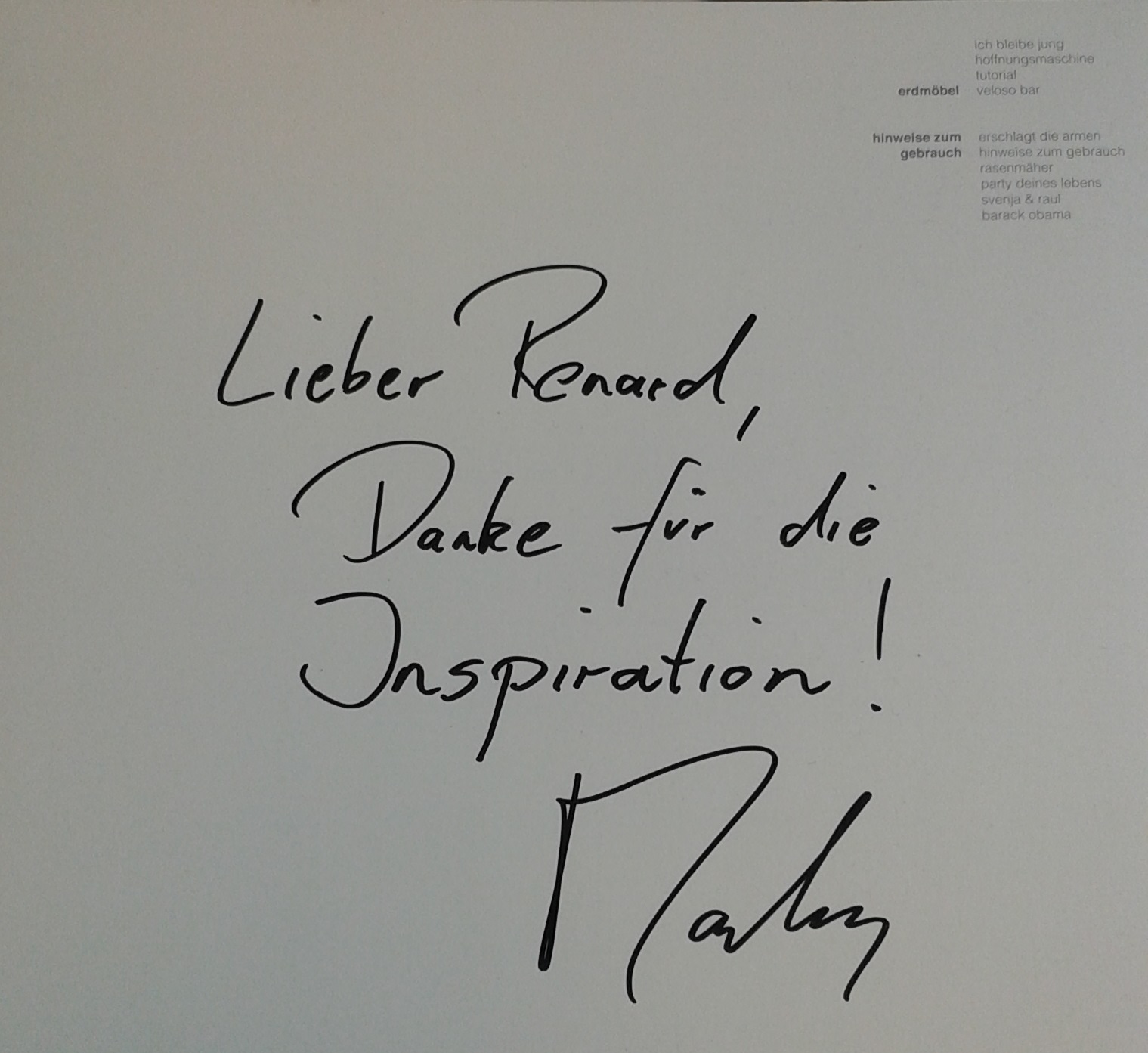 It was great fun engraving Oene van Geel‘s score ‘Turbulence’ in Sibelius. We are both very happy with the result. I hope that this increases the chances of this beautiful piece to be performed the world over. 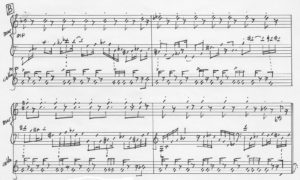 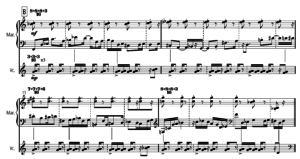 SPOKEN Saxophone Quartet received the Keep an Eye Award, and besides a well-crafted piece of Cardboard also 10.000,- Euro to make a recording. So chuffed to work with such talent (and wealth…)! 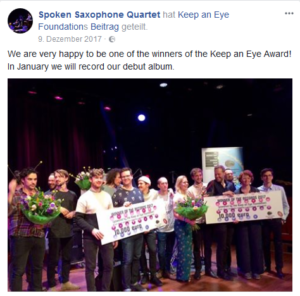 It is Sinterklaas here in the Netherlands and children (not the naughty ones, mind you) receive presents from the good, old Saint. Usually I don’t get too excited on this day, as I rarely get anything in my shoe anymore (too naughty?). But the developpers at Dorico sure made my day this year by introducing DYNAMIC CUES with the new update!

I was one of the first to purchase Dorico when it came out, but more out of solidarity with the former Sibelius development team. The first version was lacking many vital features for a professional engraver: Chord Symbols, Slash Notation, Piano Pedalling and CUES.
I knew, however, that Daniel Spreadbury and his exceptional team would make the wait worthwhile and they did. I salute you!

Last chance to see and hear ‘Spiegelpaleis’ by Klaas de Vries – for now, at least. The first version in 2012 as well as the finished version of this year were engraved by me.

Here a radio interview on NPO1 KUNSTSTOF (in Dutch) with Klaas
(click on the picture to be redirected, please): 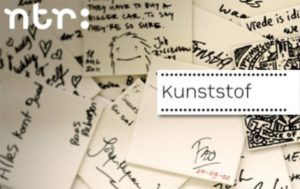 Deuss Music just published a video about the rehearsal process for ‘Die Frau Ohne Piano’ – a Chamber Opera by Paul M. van Brugge. I engraved all the music in close collaboration with the composer.

This week is projectweek @ Codarts and I’ll be talking RHYTHM with all the students of the composition department. While I will focus on theoretical concepts behind Groove, Pulse and Metre, colleague Friso van Wijck will guide the students to a more practical understanding of all those difficult rhythms. 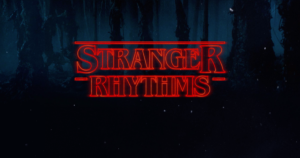 I’ve just heard that Stadsklanken will receive a 3rd run in 2018! For those who just cannot wait the video below:

Paul Auster’s new novel ‘4321’ has made a great impression on me. It did in writing what I wanted to do for a long time in music: suggest different outcomes to one narrative. Below you see a plan of a new piece for a quartet. But which quartet will it be? 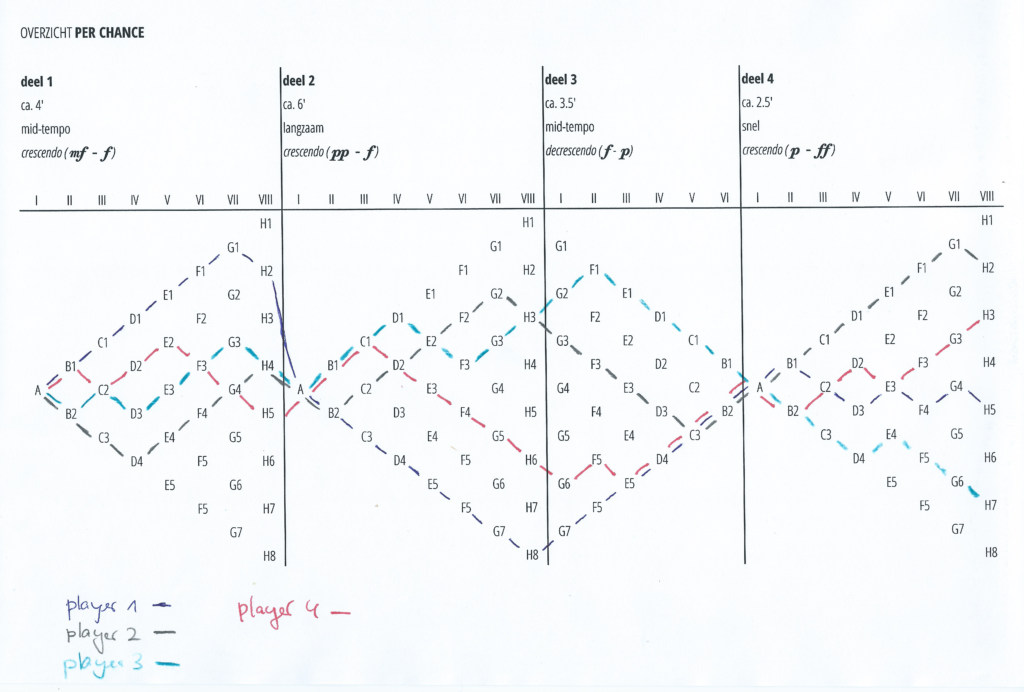 Ever wondered why to use wavy beams? Ever wondered how?
Good news: From next semester on I’ll be sharing this knowledge (and some more) with students of Codarts.
“Contemporary Music Engraving” here we come!
[Excerpt above from ‘Spiegelpaleis’ by Klaas de Vries, published by Deuss Music]

Finally: Laurens de Boer and I found time to re-connect, refreshing our ideas about my contribution to his fantastically challenging Percussive Piano project. I’ll be writing music inspired by Thelonius Monk, Frankie Dunlop and a Chrome dioxide cassette tape (remember those?). I’ll post about the proces from April onwards. Stay tuned.

‘Stadsklanken’ also in 2017. The fitting song for this kind of weather from today’s performance:

Sold out concert at De Doelen with ‘Instructions’ by Rodrigo Faina and me, played by the one and only David Kweksilber Big Band.
Listen to their ‘Instructions On How To Kill Ants In Rome’ here:

Already the third performance of ‘Stadsklanken’. Listen to Naomi and a saw (played by Pepijn) singing.
You also hear Remses dancing. Well, that’s live/life, isn’t it?

What an incredible joy and honour it was to engrave this piece by Klaas de Vries: ‘Schizzo’.
Watch a short documentary about his collaboration with René Uijlenhoet beneath:

I have had great fun arranging this Gershwin Classic.